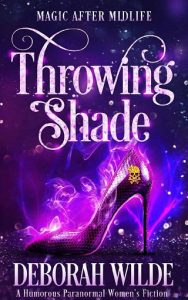 She’s ditching her shapewear, owning her hormones, and letting her magic fly free.
Underestimate her. That’ll be fun.

To make matters worse, her best friend goes missing and Miri is thrust into a world of hidden magic, vampires, and a legacy of hatred aimed directly at her. Hard to say which is more dangerous, this spiderweb of supernatural power plays, the grumpy French wolf shifter she’s teamed up with, or Miri herself, kicking butt and rediscovering the woman who got lost along the way.

But lines get blurred in the shadows, and if she’s not careful, she could lose everyone she loves. She’ll have to turn her invisibility into strength and pray they never see her coming.