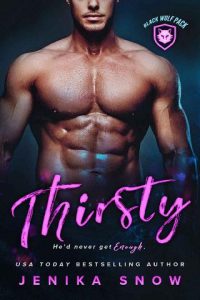 We were a close-knit community of wolf shifters, and finding your fated mate was a rare gift. So when it happened to me, I knew I’d fight to the death to claim her as mine.
But she was the Alpha’s daughter.
Off-limits to everyone, especially me, the Beta of the pack. The Alpha’s second-in-command.
Mia was the one female who had been born to be mine and mine alone. There would never be another for me. There never had been anyone for me. And when I finally gave myself over to a woman, when I kissed a female for the first time, touched her, I’d give that honor to my mate only.
And the way she looked at me, the innocence that poured off of her but mingled with her bone-deep need for me told me my mate was ready to take things to the next level. She was ready to let me claim her… mark her.
But there was one massive obstacle stopping me from making my dreams a reality, from making my fated mate mine. And that was the Alpha—her father—finding out and trying to stop me.
He had his own heartache in the past, and because of that, he held Mia very close, was very protective of her. He wouldn’t give her up without a fight.
And when the truth was finally revealed, there was only male who had the strength and power to challenge the Alpha… and that was me.