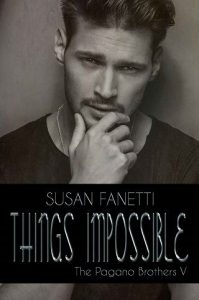 THE CONCLUSION OF THE PAGANO BROTHERS SERIES

Alex Di Pietro started working for the Pagano Brothers in high school, to help his mom with the bills after his dad skipped out. Several years later, he’s still a lowly associate, too young to make his bones. However, because he looks the part, he’s been given the job of guarding one of Don Nick Pagano’s precious daughters while she’s at college.
He takes that job seriously; he knows first-hand what happens to a man who’s let the don down, and he never wants to be in that place again. But it’s not easy to ignore his growing attraction to the sweet, sad girl he’s charged to protect.

Lia Pagano is trying to have a normal college experience despite who her father is. She hates all the security around her, but it helps that her bodyguard does what he can to give her some space. It doesn’t hurt that he’s handsome and kind, either.

All she wants is a chance to make her own life her own way, but that’s not so easy when your father is Don Nicolo Pagano, the so-called King of New England.
Nick Pagano has been don for a long time. He knows his time at the head of the table is moving toward its end, and he intends to leave a legacy of his own choosing. To do so, he will have to declare a civil war, between the old ways of Italy and the new ways of America. He’s marshaled his allies and is prepared to win, but it will not be easy.

He means to protect his family from that war at any cost.
When Lia almost falls to a danger not a part of Nick’s world but very much a part of college life, Nick calls her home—and learns that his daughter and the bodyguard he trusted with her protection have grown much closer than he’d intended. Or wanted.

They are all fighting for the future they want, for things others say are impossible.
But no war can be won without pain and loss.
The true victory comes in what we make of what’s left when war is over.