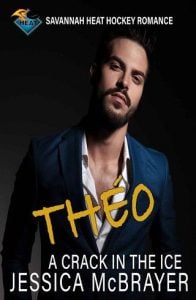 I never knew a person could hurt so much.

My wife died, and my little girl needed me. I did the only thing I could. I retired early from the Los Angeles NHL team. L.A. is where I’d met my wife, where my daughter was born, and where my career ended.
Sarah died a year ago, and my house was full of haunting memories. My mother-in-law is becoming a problem. She never approved of the way Sarah and I were raising our daughter. Cicely and I had more heated arguments than civil conversations.
I was just going through the motions with the rest of my life, well, except with Rosie. She was the light in my world. I had no regrets about retiring to take care of her full-time. I was tired of L.A. and how everybody stepped on each other to get ahead. I didn’t want Rosalie, my beautiful three-year-old little girl, to grow up here. We needed a fresh start. But I hadn’t figured out how to move on.

Then my old friend, Jakob Baumgartner from the Savanah Heat, called. We grew up together, playing in the same hockey clubs in Europe. We’d become close friends and had always stayed in touch. He was at Sarah’s funeral. One of the few people who actually cared about her and about Rosie and me. He didn’t come because he felt obligated or because he wanted to be seen by the cameras that robbed us of our privacy.
Since then, he called me religiously to make sure Rosie and I were okay. I could talk to him about anything. I knew he’d never judge me. Then he called with a solution. A solution I didn’t know if I was ready for.

The Heat needed a center because their captain had retired at the last minute. Their GM had a family emergency and wouldn’t be coming back. Jude, their captain, was offered the job. He was at that age when most hockey players retired. He was Jakob’s brother-in-law and my buddy said that Jude wanted to stay closer to his family. Not as much traveling and a chance to shape the future of the team. Great opportunity. Jakob talked to the team owner, Jude, the new GM, and their coach, and he told me they wanted me to play for them. They agreed to let Jakob talk to me first. I’d have a one year contract and could decide at the end of the season if it was working out for me and if I wanted to stay. I had two days to decide. It was only three weeks before the preseason started and a lot would have to happen to get me into playing shape. Thank God I’d stuck to my workout and running routine. Kept me sane when I felt like everything was hopeless. I’d also have to move across the country with a toddler.

Did I even want to play again? The wave of emotions rolling through me were complicated, but the chance to make a fresh start was what we needed.
I told him I’d do it if he could help me find an amazing nanny. I wouldn’t leave Rosie with just anyone. He told me he already had that covered.
Sneaky bastard. He’d set me up anticipating any excuses I might come up with and then found a solution.
I felt like I was on the precipice of something life-changing and once I made the choice, I wouldn’t be able to turn back. In the end, it was a simple decision. I wanted more for Rosie and me.