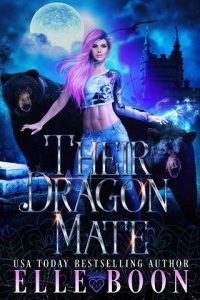 A Forbidden Love.
A Bond Tying Them Together.
A Secret That Could Destroy Them All.

She’s always taken the path less traveled. They’ve always barreled through roadblocks. Can they find a way to be together without losing themselves?

Lula’s a Fierce Dragon… She’s given bits of herself to others when she was sure she had no mate of her own, even knowing it would cost her life at some point.

Atika and Abyle, Twins with A Purpose… They lived to protect their clan until their brother took over as alpha. Just as they think they can relax, they meet their truemate. A feisty dragon female who runs from them.

The Triad Bond… Their beast won’t be denied but finding their little dragon proves harder than they’d anticipated. However, once they bond with her, there’s no denying the love they share. What they didn’t foresee was a stranger from Lula’s past coming for her and her mother.

Will the trio have a chance at happily ever after, or will the Dragon King who lost his greatest treasures demand back, or kill who stands in his way?