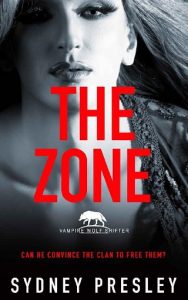 Salford and Ruby, vampire-wolves, have been born into The Clan, into the Level where killing is expected. Hating their jobs eliminating humans who’ve discovered vampire-wolves exist, they long for better times, where bloodshed isn’t the order of the day. But that isn’t about to happen anytime soon—not while Albert, one of The Clan’s twelve Leaders, oversees everything they do.

Ruby, a cross-dresser, has spent many of his previous centuries trapped in the closet. Lately, though, he’s been able to wear what he wants and can express his love for Salford in public. Knowing how freeing that has been, he wishes The Clan laws were different and that he and Salford didn’t have to kill, freeing them from that dreadful closet, too. But it would take a strong person to ask The Clan to consider a vote that would allow Ruby and Salford to be exempt from having to kill, and Ruby isn’t sure he’s the right man for the job.
With a London gang discovering vampire-wolves exist, and Salford having dreams in The Zone that tell him what they must face next, Salford and Ruby must eliminate the men who are after them. But someone else is also a danger—someone closer to home. Someone who should have vampire-wolves’ best interests at heart, but doesn’t…