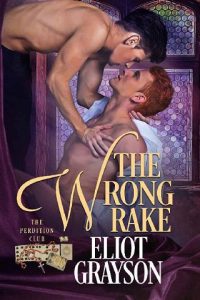 Harry Standish returns home from Waterloo expecting a quiet reunion with his family. Instead he finds his sister’s reputation ruined and his mother in a state. The culprit: Simon Beaumont, rake, wastrel, and co-owner of the London gaming hell Perdition.
A duel isn’t an option. Given Harry’s skill it would be little better than a murder. But he means to have it out with Simon and force him—somehow—to undo the damage done to his sister. When he walks through the doors of Perdition, he finds himself out of his depth, in every possible way. Simon isn’t at all what Harry expects. He’s beautiful. Charming. Sly. And, most shockingly, eager for Harry’s attention.
Simon is accustomed to every form of sophisticated debauchery—in fact, he presides over it nightly. But a rough-mannered soldier with no understanding of the rules of London society takes him off guard. Harry may not be Simon’s usual fare, but he’s irresistible.
For Harry, Simon’s his greatest enemy since Napoleon was finally sent packing. Harry’s insistent that Simon undo the damage to his sister’s life. Simon only wants to clear his own name. Until both of them realize there may be more to win, or lose, than reputation…