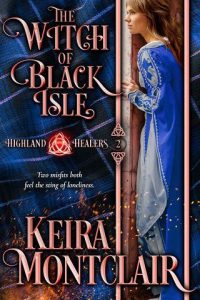 Two misfits both feel the sting of loneliness.
But are their differences too great to overcome?

Jennet Ramsey has lost her dearest friend. Not to death, but to marriage. The inseparable girls grew up traveling with Jennet’s mother, the most renowned healer in Scotland. Now alone, Jennet feels adrift with no compass. She’s a talented healer but lacks self-confidence and is considered socially inept and cold due to her analytical mind. With her friend married, Jennet is isolated and wonders if she’ll ever find her own happiness or true purpose on Black Isle. Then, when summoned back home to cure the mysterious illness ailing her father, she fails miserably, and her father lashes out at her. Leaving the Ramsey keep in humiliation, she’s abducted. Resourceful and clever, she claims to be a witch and uses trickery to make her captors believe she’s cursed them, fooling all but one of them, an evil man whose vile intentions could leave her dead.

Ethan Matheson is considered odd. Intensely loyal, he’s a fierce warrior and deadly with a dagger. A born voyager skilled with direction and tracking, he could lead large groups of men, but prefers the solitude of the stars because they never change or deceive him. However, one woman on Black Isle makes him rethink his stance on being alone—if only he could forget his past and learn to trust again. Encouraged by his brothers, Ethan insists he escort Jennet on her trip to Ramsey keep, hoping to have a chance to get to know her. But a misunderstanding between them has Ethan leaving early, feeling, once again, that he will never find someone to share his life with. As he rides, he can’t rid himself of the foreboding sensation Jennet is in trouble and rushes back in time to rescue her.

Soon after they arrive at Black Isle, news of her ‘witchcraft’ spreads and she is to be tried and put to death. But Ethan will not lose his one chance at happiness—no matter what he must do.