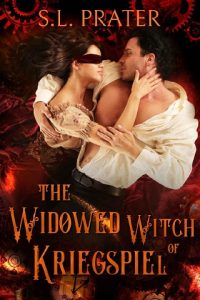 “Are you a lawman, Inspector? Or my man?”

A priest has been murdered. Inspector Bastion is selected to lead the case, but he’s got more on his mind than justice. Ten years prior, he lost his heart to the victim’s now-widowed wife—but she’d already been paired in marriage against her will.
Now he could have a second chance with the legendary witch, but Fiona doesn’t seem to remember him or the affection they once shared. Distrustful of the constabulary, she’s refusing to answer any questions that could solve her husband’s murder or the attack on her that same night.
In an attempt to lower her guard and win her heart, Bas pursues her to the University of Kriegspiel, where she’s enrolled as a student. But his efforts only make the widowed witch more suspicious … With a murderer still at large, will Bas win Fiona’s trust before it’s too late?