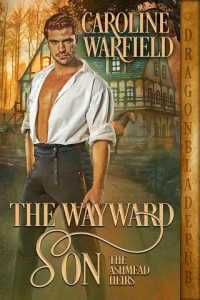 She knew Willowbrook would never be hers. How can she make the heir love it as she does?

Sir Robert Benson’s life is in London. He fled Ashmead the day he discovered the man he thought was his father had lied to him, and the girl he loved was beyond his reach. Only a nameless plea from his sister—his half-sister—brings him back. He will not allow a ludicrous bequest from the earl who sired him turn him into a mockery of landed gentry. When a feisty little termagant with flashing eyes—and a musket—tries to turn Rob off the land—his land—he’s too amused and intrigued to turn away. But the longer he stays, the tighter the bonds that tie him to Ashmead become, strengthened by the powerful draw of the woman rooted on land he’s determined to sell.

Lucy Whitaker’s life is Willowbrook, its land, its tenants, its prosperity, but she always knew it wasn’t hers, knew the missing heir would come eventually. When a powerful man with military bearing rides up looking as if he wants to come in and count the silver, she turns him away, but her heart sinks. She can’t deny Rob Benson his property; she can only try to make him love the place as she does, for her peoples’ sake. A traitorous corner of her heart wishes Rob would love it for her sake.

His life is London; hers is Ashmead. How can they forge something lasting when they are torn in two directions?