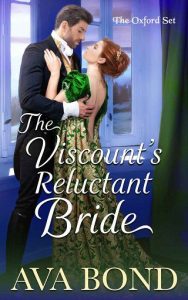 A desperate spy in need of an heir.
Viscount Gregory Silverton’s twin has wanted him dead for years. The brothers have faced off as opposing spies during the Napoleonic wars, but when Silverton discovers that he is dying, he realises that he must marry and sire an heir to prevent his nefarious brother from inheriting his title.

A marriage of convenience, neither planned nor imagined.
Maeve Walsh is a kindly, practical schoolteacher with a hidden and passionate soul. Upon discovering her father’s debts, she asks his former employer, Viscount Silverton, for help. But the Viscount has other ideas, and an urgent proposition: marry him, bear him a child, and within a year Maeve will be a rich widow.

Can a union formed only by necessity led to anything deeper?

As Maeve and Silverton draw closer, their surprising attraction shocking to them both. But as the Viscount’s revelations and his dangerous past threaten their newfound bond, is there any chance that their marriage can become one of loving affection—and can their love survive?