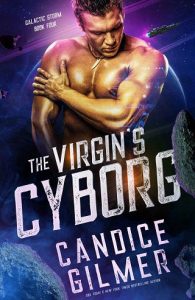 The Terran Empire is at war with The Rhimodian cyborgs. The Terrans believe the cyborgs have stolen a system of planets from them. At least, that’s how it started.
It degenerated into hatred and fear.

Imperial Princess Eleanor Bron wants to prove her worth. Though truly, what could she do, as a second child? She was not the heir to the Empire. She was merely the backup plan. While her sister Caoimhe never treated her as anything less, it was obvious that no one expected Eleanor to be more than bartering material for whatever merger the Emperor formed.
The peace treaty with the Rhimodian cyborgs is the first time Eleanor has ever been sent on any sort of diplomatic mission, and she’s nervous. After all, their mother died on a diplomatic mission to create a peace treaty with the Rhimodians.

What could happen to her? The spare? The unimportant one?

Jedriek, the youngest in his unit, had initially been bored with the mission of escorting the Terran Ambassadors into the Sol system for the peace negotiations. He would much rather be out there fighting.
At least, that’s how he felt about it, until he saw the picture of the Princesses.
Unsure which one is which, Jedriek finds himself immediately drawn to the one with the bright blue eyes.
When the Ambassador’s ship explodes, Jedriek finds himself face to face with that very princess. And he is enthralled with her. Petite and curvy, she awakens his Craving like nothing he’d ever known.

More so than any previous experience, Jedriek knows that he will do whatever he has to in order to please her.
Fight the entire Terran Military by himself, if he has to.
When Eleanor crashes on Sol-2, a desert and mountainous moon, she finds herself teaming up with a giant cyborg. Even bigger than she’d been told.

And he stares at her like she’s a prize. She’d been seen like a prize before, and she wasn’t about to be this cyborg’s prize.
So she does the only thing she can think of to save herself and her sister.
She lies.