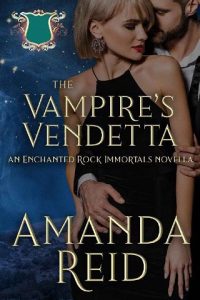 A former CIA assassin turned vampire. A demon blood smuggler. Facing a common Fae foe, they must learn to trust or be destroyed by their secrets.
Former CIA operative Caro Kavenaugh contracted to become a vampire for one reason—to kill the biter who murdered her sister. Mission accomplished. The only assignment she wants now is an opportunity to avenge victims, and the person who can give her that chance is everything she doesn’t want to need—a panty-dropping demon.
Westryn operates a blood-smuggling ring, which is the front for a secret organization dedicated to eradicating human abuse. He needs help, but he’d be lying if he said Caro’s assassin skills were the only reason he asked the gorgeous former-spy-now-vampire to join his mission. She fires his blood like none he’s met, but he hasn’t been alive for millennia not to recognize that such a fascinating temptation might be a slayer sent to kill him.
When the two must work together to combat a common Fae foe, Caro proves herself indispensable in the heat of battle and resurrects and restarts his cold heart. Can West reveal his secret to her, or will his inability to trust cost the lives of thousands of victims…including his own?