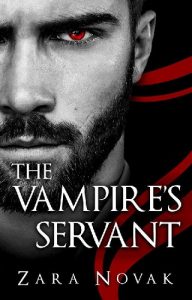 Jess’s scarred back hides her greatest secret: she is the next daughter in the prophecy. She’s terrified of her impending fate and flees the safety of Castle Belmont to finish her scientific research. Jess is determined to outrun her destiny, but she forgot about one thing: A vampire named Eli York.

Hunters killed his brother. Shifters destroyed his family castle. Jess Chaplin is the only thing Eli has left in this world and he’s not letting her go without a fight. The dark vampire has protected the red headed human all her life, but the threads of fate are twining now, and he can’t ignore the woman she has become. Together they journey across the valley and uncover a secret that has been hidden for twenty years, while trying to resist the insatiable attraction that now burns between them. Vampirism corrupts. Innocence withers. There’s no way it could ever work… is there?

War has finally arrived in the valley and Belmont Castle is about to fall for the first time in a thousand years. The High Vistor has brought an army to destroy the Belmont family and end the prophecy once and for all. If he succeeds, then all vampires will perish.
Will evil triumph over good?

Will the mates succeed with the prophecy?
Is something even greater afoot?
There’s only one way to find out.