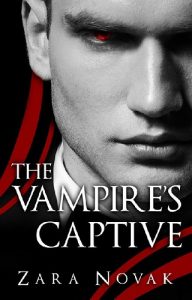 Ellie Thorn was raised to hunt vampires, and now she’s captive to one. Her mysterious vampire captor is a dark and enigmatic character, with a broken mind that is far past repair. He can’t remember his name, he can’t remember where he came from. The only thing he can remember is Ellie. He’s convinced she’s the next part of the prophecy. She’s not so sure.
Can she overcome a lifetime of abuse and hurt to trust a destiny that seems so cruel? Can she learn to love the one thing she was taught to hate?

Wraith Belmont was thought long dead, but now he’s back and he’s found what he was looking for. He’s tall, dark, handsome and mysterious, but a near-death experience has left him unable to remember anything and his mind is broken in two. Can he fight against the dark half inside of him that wants to take control? The half that wants to destroy everything?

Tensions are rising in Belmont valley and the stakes are higher than ever now that the Red Circle has joined forces with vampire hunters. The high lord of vampires wants to make sure the prophecy fails and will do anything to make sure the lost daughters don’t meet their destiny. A new assassin has been forged in the depths of the dark vampire kingdom. His next victim? Ellie. Life, love and lust are on the line as the dark strings of prophecy entwine. Will the vampires secure the next part of the prophecy before defeat destroys their kind? Time will tell…