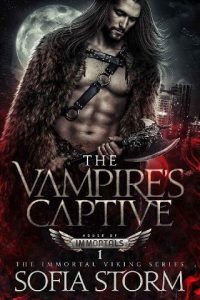 She’s a blood-slave who longs for freedom, but this Viking vampire has other plans…

As the favorite blood-slave of Nevada’s vampire king, Arietta Heron lives a waking nightmare with no escape. Her master’s cruelty is as inevitable as her fate, leaving her with nothing but impossible dreams of freedom.
Until the night a strange, ancient vampire kidnaps her and changes everything she knows about what it means to serve one master and one master only…
A Viking takes what he wants. And every vampire wants a taste of Bjorn’s new prize.
Falling for a blood-slave almost ruined him once already, and Bjorn Elding doesn’t make the same mistake twice. But after stumbling upon a blood-slave like Arietta turns his immortal world upside down, he just can’t help himself.
Fully claiming the young woman as his own is a dangerous game. But the damage is already done, and with a continent of vengeful vampires on his heels, Bjorn must now gain her submission to protect that which does not belong to him…
…and hope her unbreakable spirit doesn’t get them both killed in the process.