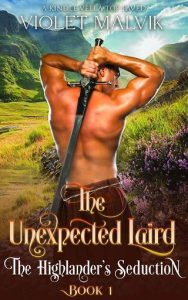 The moment Elspeth Duncan knelt by her dying father’s side she knew she would be forced to carry the weight of responsibility for the rest of her life. With no brothers to take her place, as her mother had died giving birth to her and her father had never remarried, she is to be the new chief of a clan strongly opposing her authority, a reality she tries to postpone for as long as she can.
But when the clan’s coffers start running low, it becomes clear how desperately the Duncans need an alliance, and the only way to form such a partnership is by agreeing to marry the despicable Roberth Ruthven. It is not only a union meant to put an end to her clan’s crisis but also the only way her people would accept her.
Fergus Duncan, her father’s cousin, and right-hand man is her only ally in the ruthless game of matchmaking, but unfortunately for Elspeth, her choices seem to be set in stone. That is until one day she meets a stranger at her favorite loch, and her life takes another unexpected turn…
Laird Willian McCollum has a peculiar way to show his interest in her. After having his men kidnap her during the night, he invites her to his keep with an impossible proposal: form an alliance with him and cut all ties with the treacherous Ruthven against all her clan’s hopes and demands.
Elspeth knows he must be a madman, and she a madwoman, for she finds she rather enjoys William’s unexpected attention on her. There is something about McCollum that intrigues and delights her, and it is not merely his handsome face, yet sometimes a wolf may appear in sheep’s clothing, and Elspeth is about to find out why…