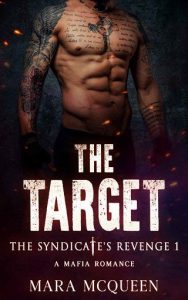 His Clan destroyed her family. Now she’s forced to be his.

When a Clan wedding turns into a massacre, Emiliana “Ella” Caputo, the Syndicate’s First Daughter, will do anything to find out who killed her dad—even marry the vicious Brotherhood Commander. The Shadow. The Gunman. A man as ruthless as he is gorgeous.

Now the enemy she has despised all her life might steal her heart.

The last thing Axton wants is a fiancé. Damn spitfire reminds him he has a soul. And that mouth of hers… But if she finds out Axton knows who killed her father, all hell will break loose.

Can two lost souls find themselves and love in the dangerous Underworld?

When the Clans clash, which side will you choose? #SyndicateVSBrotherhood

Delve into the twisted Underworld of The Target, book 1 in The Syndicate’s Revenge, a Dark Enemies-To-Lovers Mafia Gothic Romance series. The novel can be read as a standalone, but the series has an overarching mystery plot. The novel has steamy scenes and mentions of violence.