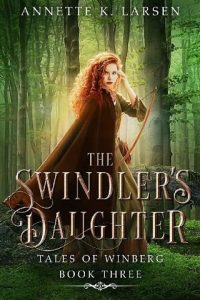 Miriam left her thieving past behind.

But now she’s fallen for an outlaw, and the only way to protect those she loves may be to become one herself.
Growing up the daughter of a thief and con man taught Miriam how to steal. But it also convinced her that’s not the lifestyle she wants. Having escaped that life with her brother, she now values her place on the right side of the law. However, when the new magistrate of Murrwood Village starts taxing the people and stealing their goods, Miriam finds herself an unwitting part of Rowan Lockley’s unconventional and illegal form of justice.
He has a tragic past and deadly aim with an arrow, but as Rowan and Miriam fight over the question of right and wrong, Miriam must also fight her growing feelings for him. How can she possibly fall for an outlaw when that’s the life from which she ran? She’ll have to decide whether obeying the law and doing what’s right are always the same thing. And if they’re not, will she have the courage to embrace the thieving skills she’s shunned for so long in order to help those who need it most?
Full of danger and daring, this romantic adventure reframes the classic tale of Robin Hood, as it forces Miriam to choose between loyalty to the brother who saved her and the love of a man who’s given up on the law.