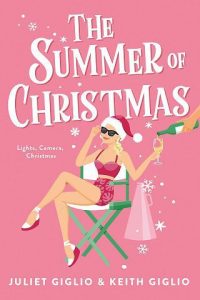 Experience a behind-the-scenes look at the making of a Christmas movie in July in this charming romantic comedy by writing duo Juliet Giglio and Keith Giglio!

Ivy Green, an up-and-coming screenwriter, can only watch as her life is turned upside down. Her script, based on her love story with her high school sweetheart, Nick Shepherd—who broke up with her days before Christmas five years ago—is being filmed in her hometown! In the middle of summer, during the month of July, the production crew creates a winter wonderland Christmas.
Now back home, Ivy is forced to face Nick for the first time, which he isn’t too happy about. To complicate matters, Ivy isn’t sure of her relationship with the producer, the town is overflowing with movie stars and adoring fans, and worst of all—the actress playing Ivy develops a crush on the real Nick! Now, with renewed and confusing feelings about Nick, Ivy is determined to see if there is anything left between them, but in the end, Ivy will need to re-write her life script to get back everything she thought she lost.