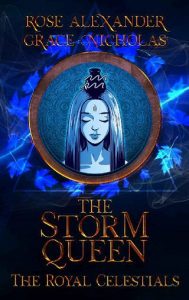 Murder and magic… a battle to reclaim the throne…

Being a water bearer for my community was easy: just my trusty mule, Lily, and me against the world. But when a bard arrived in town weaving tales about the True Queens of Nephalia, everything changed.
Those stories were supposed to be myths—tales told to children around a campfire. Yet, this man sung truths that had been buried long ago of the Dawnings that brought the queens to power and the magical patterns on their skin marking them as qualified for such a status.
Marks… described exactly like the one that appeared on my arm the very same day.
According to the legend, these women were hunted and killed by others—imposters—who claimed to have earned the throne.
The warning was loud and clear. But instead of living in fear, I intend to compose a story of my own: with the help of three amazing men, I must save myself and the other marked women from such a fate.
If we succeed, Nephalia will prosper.
If we fail, the rekindled magic of myth will remain as such: nothing more than a tale told around a dying campfire.