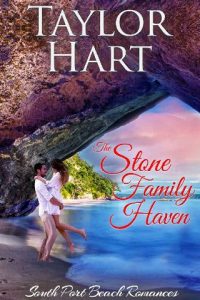 A man who has been burned too many times. A woman who’s running from her ex. Will they help each other heal and find a second chance at love?

Brooks Stone, FBI superhero, strike that, demoted FBI now … doesn’t want to talk about why he had a mental break a year ago. He doesn’t want to talk about his dead partner. He really doesn’t want to talk to about why the tremor in his hand won’t go away. When he agrees to watch the family Inn for two weeks, he finds himself looking forward to the peace of South Port. Too bad he meets a strange woman with eyes that reminds him of the ocean and an attitude so bad, she could scare off any lethal assassin, except him of course.
Serenity Rome only knew one thing about life; it was hard. Good thing she could do hard. She’d done hard when her father had left when she was ten. She’d done hard when her mother had been given the diagnosis of Alzheimer’s five years ago. And she’d done even harder when the man she’d married had turned violent and threatened to kill her. Now, as she rus for her life, all she knows is that she has to find the Conquistador’s gold. The gold her family journal proves she had claim to.
When she wakes up on a park bench, and discovers she’s face to face with Brooks Stone, one of the infamous Stone family, she has no idea why he offers to have her stay at his family Inn. She only agrees to it because it gives her an opportunity to learn more about this treasure. Not because the man is gorgeous. No. She could care less about how gorgeous he is or how he seems to see right through her lies, but wants to help her anyway. No, she doesn’t care about any of that.