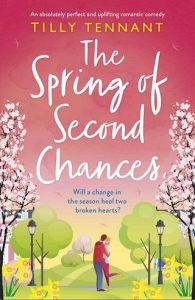 Twenty-seven-year-old Phoebe has spent the last year living under dark clouds. This spring she is determined to embrace blue skies and new beginnings. But will she have the strength to open her heart to love for a second time?

Heartbroken after losing the man she was about to spend the rest of her life with in a tragic accident, Phoebe is finally ready to let herself heal and embrace a second chance at happiness.

She’s landed her dream job in the toy shop she’s loved since she was a girl and when single dad Jack brings his five-year-old daughter along to story time, it seems the stars have aligned to bring them together. He’s funny, handsome and his devotion to his daughter shows Phoebe he has a heart of gold.
But just when it seems she has everything she’s ever wanted, Phoebe discovers the shop is in deep financial trouble. She’ll need every bit of creativity and passion she has to save it.

As spring blossoms to summer sunshine, Phoebe works to turn things around, while her feelings for Jack deepen. But after taking the big step of meeting his parents, Phoebe is left questioning everything. They make it clear Phoebe doesn’t measure up to Jack’s late wife and she can’t help but worry that he feels the same. Maybe this wasn’t meant to be her second chance after all.

Can Phoebe save the place she loves and the future she’s been dreaming of?