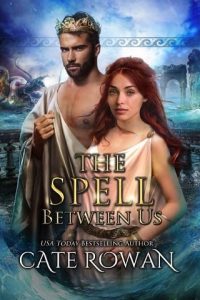 She’s cursed into the shadows by a goddess.
He’s enslaved by an immortal queen.
Only by rescuing each other can they be free…
Poseidon’s conniving sea-queen has captured daring Prince Dexios as her slave. To survive, he must rely on his wits — and on encouraging messages from a mysterious friend, Ara, who gives him hope.
Long ago, Ara was challenged to a weaving competition by the jealous goddess Athena, only to be unjustly cursed and transformed into a monster. She’s concealed herself from the humans who’ve tried to kill her for centuries, yet the courageous prince’s plight tugs at her wary heart. During a daring escape, Ara risks everything to help him… and is plunged back into her human body.
Now, as she and Dex flee their tormentors, their mutual attraction sizzles. They’re falling for each other… but she still mistrusts humans. And he’s a crown prince with a very public life and an arranged betrothal to the daughter of an enemy king.
Can a love born in darkness overcome the dangers of leaving the protective shadows, breaking a betrothal, and sparking a perilous war?