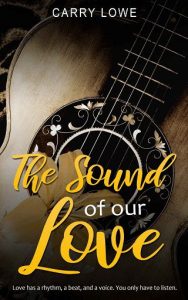 The Sound of our Love by Carry Lowe – Free eBooks Download

Her grandmother often told her love has a rhythm, a beat, and a voice. She only had to listen.

Presley has always believed in love.
She was raised listening to her grandmother wax poetic about it.
The type of love that has a beautiful rhythm, and though, it sometimes got off-key, it nonetheless created a spectacular song.
The type of love that has seen many seasons, weathered many storms and has strengthened and evolved through the years.
It was the type of love her grandparents had.
The type her parents have.
And as she grew older, she began yearning for it.
So when she met Liam Cole, she jumped in headfirst. And it was beautiful—that heart-stopping rhythm, which left her breathless, excited, and giddy.
It was as if she had been out of tune all her life and now he was there synchronizing with her very heartbeat.
He became a song that she wanted to sing over and over again for a lifetime.
But then he died, and she didn’t believe in love anymore. Or maybe, she simply didn’t want to. It hurt too much. So, she locked her heart away, put her guitar up, and was determined to never experience such pain ever again.

Years later, she was still reeling, and even worse, like one of her broken guitar strings, she was still shattered.
Liam had been a once in a lifetime experience.
A song she could never sing again.
Until suddenly, he wasn’t.

A fresh start was what she was looking for when she moved from New York City to Massachusetts to attend college.
A way to move past all the pain.
But then she went to her first frat party, and there, amongst the cheap beer and overeager coeds, her eyes meet Gunner Cole’s.
The bad boy all the girls wanted.
Yet, Presley wasn’t interested in the least and when he swaggered over, seeping with confidence, she wasn’t afraid to tell him so.
But Gunner has never met a woman who didn’t want to get down on her knees to worship him, in more ways than one, so he wasn’t about to let her deter him.
Her dismissal had left him intrigued.
He had to have her.
And, bit by bit.
Beat by beat.
Their relationship grew and the easy hookup he was searching for becomes something more.
There is just something about this girl with her sad eyes, which were hidden behind an easy smile.
And, as her walls came down, his heart unexpectedly opens.
And she, who had sworn to never love again, and he, who definitely hadn’t been looking for anything serious, find themselves in an all-out passion.
Liam may have been her first love, but Gunner became her forever love—the song to last a lifetime and beyond.
However, she’s keeping secrets—ones that can tear them apart.
And as easy as it is to fall into love, it is even easier to fall out of it.

Can Gunner and Presley survive the truths they do not want to face and continue creating notes to build their imperfectly perfect love song?

*This is a Full-Length Standalone African American Contemporary Romance Novel.