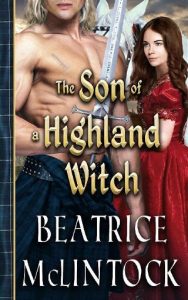 Even behind this beast, lies a wounded human heart.

Erica O’Donnel is ecstatic when her father calls her to the great hall. Rumors about a possible suitor for her have been going around for a few days, and she is finally going to learn if they are true. Indeed, Erica’s dear father has arranged for her to marry the nephew of a Laird. The man happens to be the only male heir the ruler has and thus, the next in line to be Laird!
Hearing that she will be the wife of a future Laird excites Erica! Hastily she prepares her things for the upcoming trip to her husband until news that ruin her mood arrive; her guard for this trip will be one who frightens grown men and warriors. Finn, as his name is, belongs to no clan, and legends say that he is part man and part wolf and chooses to alternate between the two!
After her father assures her that the rumors about Finn are nothing more than superstition he asks her to accept him as he is the stronger warrior he has ever had. Reluctantly, Erica begins her trip with him, feeling that she is next to a beast and not a man. However, a strange connection begins to develop between the two, and Erica discovers a heart of gold behind Finn’s coldness.
Unfortunately, before they arrive, Finn decides to go no further because this is the place his mother was brutally killed! Erica realizes that he has secret ties with her husband’s clan and she is left with two choices. She can either leave Finn behind forever or convince him to come with her and finally uncover the story that turned a boy into the fearsome man she has before her.