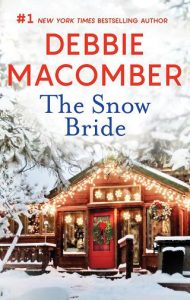 Practical Jenna Campbell has done something impractical. She’s met a man on the Internet and now, a month before Christmas, she’s going to Alaska to marry him. Dalton Gray seems to be everything she wants in a husband — sensitive, gallant, romantic….

On the flight to Fairbanks, she has the misfortune to sit beside Reid Jamison, who obviously isn’t sensitive, gallant or romantic. However, he’s not impressed with her plan to marry Dalton, a man he detests (for good reason, as Jenna later finds out). So Reid takes it upon himself to change her destination — and her marriage plans.

Which is why Jenna ends up at Reid’s cabin in tiny Snowbound, Alaska. It’s currently a one-woman town (and the other woman’s out of town). That leaves Reid, a bunch of eccentric old men, a few grizzly bears — and Jenna. Kidnapped! And then there’s a blizzard. The two of them alone, stranded in Snowbound…