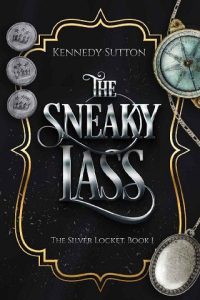 Jane has been many things in her life. A wife. A widow. A thief. A prostitute. Most recently, a woman seeking any means of escape from Grand Port.

Flying no colors and desperate for crew, Sneaky Lass is a damaged brig in no position to look too closely at any volunteers, no matter how ill-suited to sea life they may be.
After a series of decisions Jane can’t turn back from, she commits one final act of desperation; she dons stolen boots, shorn hair, and the name Dixon Ables to take up with the crew of Sneaky Lass. Now she finds herself in a position where she must keep up her boyish disguise or be thrown into the briny deep.
Concrete plans to leave the ship at the next port turn fluid as Jane becomes enamored by the mystery of the ropes, the lullaby of waves against the hull, and the wind in the sails.
That the crewmen are far from the salty rogues she expected doesn’t help her resolve. Among the filthy men, the roar of cannons, the critical eye of a whip-wielding quartermaster, and beneath the weight of her own lies, Jane finds something she long believed a fantasy—Family.
Even the frequent gaze of the fine and fair-minded captain isn’t enough to send her towards shore… yet. She doesn’t want to sacrifice everything until she is sure he knows her secret, or perhaps his attentions are something else, something more.
The problem is her new life belongs to the man called Dixon, not the woman called Jane.
The longer she stays aboard Sneaky Lass, the closer she grows to losing everything she’s come to value; new friends, the only home she’s ever known, her life.
Deceptions are difficult on land, but in the close quarters of a pirate ship, they can be deadly.