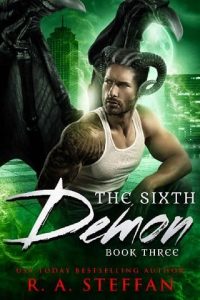 The Sixth Demon #6 by R. A. Steffan – Free eBooks Download

After Mab’s escape to Fae realm, the only way to stop a war is to risk a war.

With Nigellus poised to attack the Fae forces massed at Dhuinne’s gate, Neveah must decide what she is willing to sacrifice to alter the balance of power between long-standing supernatural enemies.
Hell’s forces will soon spill into the human realm, and if the Fae queen gets her way, no safe haven will remain anywhere for humans, vampires, or demons.
There’s only one possibility that might bring a halt to the encroaching madness. Neveah’s people washed their hands of the other races’ conflict millennia ago, but if she can somehow persuade them to help, they could put an end to Mab’s power-mad ambitions as easily as snuffing a candle flame.
A famous queen in a book once believed six impossible things before breakfast.
Neveah would settle for achieving one impossible thing before doomsday.