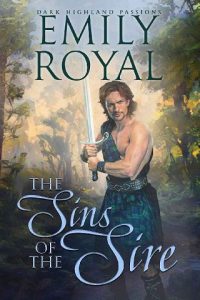 “A vengeful man must also dig a grave for himself”

It was a meeting of souls…
Two years ago, Elyssia de Montford first looked into the eyes of the captured Highlander, who stood, brave and defiant, while being tortured by English soldiers, and she risked everything to free him.
Tavish MacLean is consumed by hatred. He’s sworn, on his father’s deathbed, to enslave the daughter of the English lord who brutalized his beloved sister, and return her to England with a Scottish bastard in her belly. But when his men throw their prisoner at his feet, Tavish recognizes Elyssia, the brave lass who once saved his life and stirred his heart.
Though his clan demands retribution, Tavish questions his loyalty, becoming increasingly enthralled by his fiery captive, the woman who fights him during the day, but whose willing body ignites untold passions at night.
But vengeance comes at a price. Dark secrets lurk in the shadows which, if revealed, could destroy not only Tavish himself, but everything he holds dear.