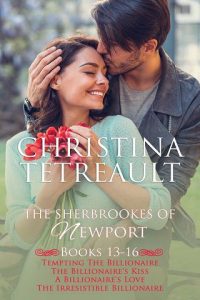 Books Thirteen, Fourteen, Fifteen and Sixteen of The Sherbrookes of Newport Series. Previously Published Separately. Bundled For Your Convenience

Book Thirteen: Tempting The Billionaire
Josh will do anything to make sure he keeps joint custody of his young daughter, including putting his career on hold and getting married. There isn’t a doubt in his mind that Courtney Belmont, the woman he spent an incredible two weeks with, is perfect for the role. Her reputation is flawless, her family is powerful, and more importantly, she’s remained in his thoughts since the last time he left her hotel room.

Although hesitant, Courtney agrees to be Josh’s temporary wife. However, it’s not long before Josh wants her in his life forever. But can a man who spends his life acting convince her that his feelings are real?

Book Fourteen: The Billionaire’s Kiss
Rather than follow in the footsteps of her family members, Juliette Belmont has made a career out of being in front of the cameras. When she finds herself in the middle of a scandal, she escapes to a small town in New Hampshire. Once there, she has three items on her agenda: make some decisions regarding her life, avoid the media, and don’t get involved with one of Avon’s own, no matter how gorgeous she finds him.

Everything changes when an ice storm leaves Juliette in the dark, and Aaron opens his house to her. Or it does until reality comes knocking, and Aaron must decide if he can live in Juliette’s world.

Book Fifteen: A Billionaire’s Love
In all the ways that matter, billionaire Curt Sherbrooke already considers Taylor’s niece, whom she’s been raising since Reese was a baby, his daughter. However, with his and Taylor’s wedding just weeks away, he wants to adopt Reese, so she’ll be his daughter not only in his heart but also in the eyes of the world.

Unfortunately, a single letter from Reese’s biological mother in prison sends Jordan King to Taylor’s door and puts his plan in jeopardy.

Book Sixteen: The Irresistible Billionaire
Gianna Ferguson has lived on Sanborn Island, one of New England’s premier getaways, her entire life, so she is well acquainted with spoiled, wealthy playboys. When her cousin asks her to give billionaire Alec Sherbrooke a job with the family landscaping business for the summer, she is not enthusiastic about the idea. Regardless, Gianna agrees.

It’s not long before Gianna sees Alec as more than just another playboy looking for some summer fun. But will something from Gianna’s past prevent Alec and Gianna from getting what both of their hearts’ desire?