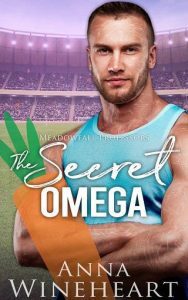 Kieran Fairfields has too many secrets.
For some people, the “Fake it ’til you make it” mantra works. For Kieran Fairfields, it doesn’t. Because no matter how much he pretends to be an alpha, no matter how much he looks like an alpha, he… isn’t one.
But sports coaches are all alphas; Kieran risks losing his job if anyone finds out that he lied on his resume. And that one alpha student at Kieran’s college, Chase Summers—he thinks Kieran is an alpha, too.
Except Chase discovers Kieran’s lacy secrets. He discovers that Kieran loves painted nails, too. Somehow, he doesn’t spread the news.
Chase also calls his omegas ‘sweetie’.
And it becomes Kieran’s biggest, most terrible wish… to have Chase call him ‘sweetie’.
It’s a good thing they butt heads so much. It’s also a good thing that Chase is graduating soon. Because the fewer chances Chase has to unearth Kieran’s deepest secrets, the less likely it is that Kieran’s heart will be broken.

This is a super-domestic 92k wild ride with MPreg, hilarious friend chats and so many wonderful presents—warning for sappy mushy goodness!
Also, Kieran needs a hug.