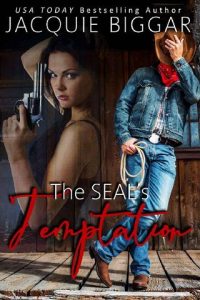 After eighteen months undercover in a Mexican cartel, Maggie is broken. The kickass agent she once was, is gone, leaving her riddled with guilt and nightmares. Forced to take paid leave, Maggie accepts the offer of a vacation on the ranch of the man who’d rescued her from an almost certain death.
Frank Stein knows the signs of PTSD, he’d suffered the symptoms himself as Chief Petty Officer of SEAL Team Five. Honorably retired from duty, Frank has found peace at the family ranch and hopes it will do the same for Magdalena. Ever since he’d first met her when she was interrogating his buddy, Jared, Frank has been fascinated by the raven-haired beauty and wants the chance to see where their relationship could go.
Adam O’Connor is Maggie’s partner. He knows her. He loved her once and could again, if she’d let him in. But he’s also angry she took the chances she did by going undercover against orders. And now, things are different. She’s different.
When a right-wing militia group infiltrates the area, will DEA Agent Maggie Holt, her partner, Adam O’Connor, and ex-SEAL Chief Frank Stein be able to set aside their differences to stop them before someone dies? And who will Maggie choose, the handsome cowboy, or her charismatic DEA partner?