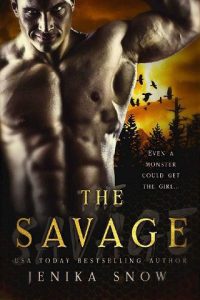 Audrey had known that the slave traders would come for her and her family eventually. There was only so much luck a human could have in the desolate world they lived in.
And that luck had run out.
With her family completely wiped out, Audrey was at the mercy of the traders, finding herself about to be auctioned off to the highest alien bidder. But she knew she couldn’t live the rest of her life as a pet, a vessel to be used in the most obscene ways… or worse.
So when she managed to escape, it wasn’t freedom she found, but a barbaric and savage male named Styx.\
And because he claimed he’d saved her life, she was now his to use in any way he saw fit.
She’d fight, but Audrey was finding it hard to keep her body and heart away from the very primal, clearly dangerous savage alien male.

Note: This story was previously published in 2016 as “A Mate for the Savage”. It has been re-edited and re-covered, but the story itself is the same.