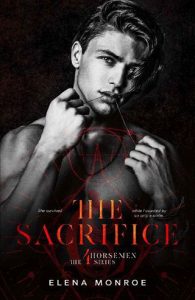 KHAOS:
I’m not living under any kind of false pretenses here. I know I’m basically a rapper’s attitude with R&B feelings and a pop star’s bank account.
There were a lot of ways to describe my unconventional lifestyle of part time cult member and full time showman.
Risk taker.
Exuberant.
And my personal favorite adjective: undomesticated.
I surrounded myself with people who liked a good time but left after they served their purpose of making sure I felt nothing but top shelf feelings.
I wasn’t about to be like my brothers who let the darkness eat away at their vindication. The only crime I had ever committed was waving the glory of being invited, of saying I came and conquered around like a badge of honor.
Spoiler alert: None of that earned me respect.
There’s only one girl who managed to rob me of my fake smile… and my watch.

GRACE:
I was a throw away, street trash, a child abandoned and scooped up by the bad people you only hear about after they get caught.
I was hard in a way people found uncomfortable and determined too much work to rehabilitate into society again. I was found guilty over and over enough to let the bad things become who I am, blurring the lines between freedom and a jail sentence.
Fraud.
Thief.
And my least favorite: fake girlfriend to a scary ass kingpin.
Forced out of a childhood I was surrounded by darkness, evil, and the kind of cutthroat loyalty that landed your body so mutilated they wouldn’t be able to tell who you were if you fell out of obedience.
They accepted me like family and there’s no quitting your family.
I had the respect to match my rap sheet.
There’s only one guy who managed to exonerate me… and my invisible wings.