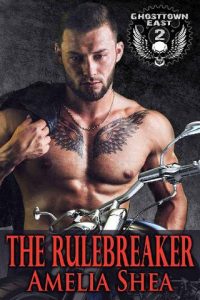 Sloane Baxter is a good girl. She may not have an enviable or even desirable past, but she’s making her future perfect, including all the things she’s dreamed of, a solid home, a job she loves, and a life she’s created despite the hurdles she’s had to leap. Sloane is living her life on her terms.
She doesn’t realize those she trusts are pulling her deeper into a dark world she knows nothing about peopled by some who threaten her safety. Then an encounter with the Vice President of the notorious Ghosttown East Motorcycle Club upends her life and sends her senses reeling. He’s completely wrong for her, but she can’t shake the memory of their encounter.
Adam “Blade” Cody proudly serves as the VP of Ghosttown East MC. He’s a leader, the second in command, and makes his club his first priority. Until Sloane shows up, wreaking havoc and chaos and making him rethink his priorities. Blade’s attraction to the nosy little pain in the neck is overwhelming, but when her past leads her down a path his club knows to avoid, the line in the sand is drawn.
But when Sloane sets off on a risky solo mission to uncover the truth, she’s ill equipped to handle the consequences. The self-proclaimed rule stickler must break all the rules to discover what’s going on around her while Blade must make certain her ignorance of the dark side doesn’t get her hurt.
Blade and Sloane don’t make any sense on paper, but in real life their fates are sealed. And yet their trajectories are heading them toward places that could destroy the life they want to build together.