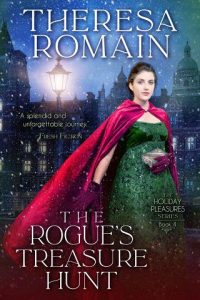 One rascally American. One disgraced earl’s daughter. Eight dogs, a mysterious puzzle box, a fortune in lost jewels … and a partridge in a pear tree.

A rogue with a strong sense of duty, Giles Rutherford has accompanied his father from America on a search for long-lost gems. If found, these jewels would allow the family to start a new life in Regency London—a fresh start Giles isn’t sure he deserves, as he hides a worrisome secret.
Their quest through the wintry villages of northern England is complicated when they rescue Lady Audrina Bradleigh—the youngest and most rebellious daughter of an earl—from the threat of ruin. To save her reputation, Audrina joins the well-chaperoned Rutherford treasure hunt. As Christmas draws near, she and Giles collect a found family of fellow treasure-seekers…and discover the unexpected promise of romance.
As clues unfold, Giles and Audrina will be led toward a love they never expected. But even if they crack every code, they can’t puzzle out how a troubled American and a scandalous aristocrat could ever live happily-ever-after…
This book was previously published as SEASON FOR DESIRE.