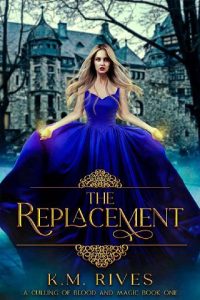 The Replacement (A Culling of Blood and Magic #1) by K.M. Rives – Free eBooks Download

She was never meant to be a member of the Culling. He was never supposed to find his mate. Fate stepped in to ensure both.

There was only one reason the bond would choose Emery Montgomery. Her twin was dead. As soon as the silver band of the Culling appeared on her wrist, binding her to the vampire prince himself, her world turned upside down.
Forced to compete for the heart of her enemy in an archaic version of The Bachelor, Emery had only three things on her mind: Keep her witch heritage a secret, find her sister’s murderer, and above all, don’t fall for the sinfully handsome prince.
August Nicholson wanted nothing to do with the pompously groomed women in his Culling, that was, until Emery showed up. She was unlike any other, calmed the dark twisted side of him few knew existed.
Instantly drawn to her, August must struggle against her intoxicating presence, because while he may want her for himself, he needs her to play her part to protect his family more.
Together, Emery and August must fight their feelings and find the culprit behind her twin’s murder, because if the Montgomery women were being hunted, Emery was next.