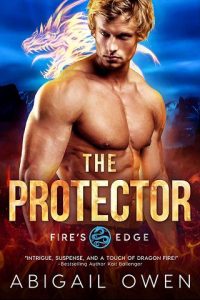 The cousin of the High King, Lyndi Chandali has lived with the constant threat of being pawned off as a political prize. A rare, female-born dragon like Lyndi can’t truly mate—not in the way it counts. Which is why she’s kept her distance from a certain sinfully delicious Beta. Instead, she’s built a life for herself giving orphaned dragons in the Americas a home.

As Beta of his team of enforcers, Levi Rowtag is a fighter first, last, and always. His job is to protect—his team, the shifters in his territory, and the stubborn woman hell-bent on fighting with him at every turn. He knows from the moment they first meet what she’ll never accept—they are destined to be mated.

But with the kings at war, the enemy is now coming for Lyndi. Worse, he’s coming for her orphans, too. He’ll have no choice but to defy his king and go rogue if he has any hope of protecting them all…and finally claiming his mate.