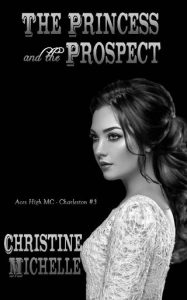 ~Anna~
I was three weeks past my seventeenth birthday when I first saw him running like a dog, as prospects do, during a family club function. I knew he was far older than me since he’d served in the Army with my brother-in-law, Deck.
He was definitely too old for me in the eyes of everyone else.
I knew the rules, and I’d be breaking too many of them for this not to be trouble.
He was a prospect, making him off-limits.
I wasn’t even 18, making me off-limits.
I was also a club princess, daughter of the Vice President of the Aces High MC – Charleston Chapter. That, more than anything else, made me off-limits.
Still, I watched and waited for the moment when I could make myself unforgettable to him, because my heart had no limits, and it wanted Joker.

~Joker~
Prospecting for the MC was turning out to be a tougher gig than I had originally imagined. I wasn’t exactly known for taking blind orders well, or taking shit from anyone in my life, so undergoing prospect hazing was trying my last damn nerve. The never-ending line of patch-chasing females was sure to make the discomfort worth my wait. Then again, I wasn’t one to do easy conquests either. The shy cutie who had been staring at me all night from the corner seemed like just the challenge my worn down soul needed.
She was a challenge all right.
Nearly cost me everything in the end.
Now, I’m stuck with a liar, an old lady, and one crazy-ass impending shotgun wedding.