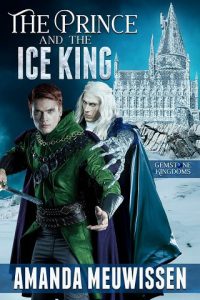 Every Winter Solstice, the Emerald Kingdom sends the dreaded Ice King a sacrifice—a corrupt soul, a criminal, a deviant, or someone touched by magic. Prince Reardon has always loathed this tradition, partly because he dreams of love with another man instead of a future queen.

Then Reardon’s best friend is discovered as a witch and sent to the Frozen Kingdom as tribute.

Reardon sets out to rescue him, willing to battle and kill the Ice King if that’s what it takes. But nothing could prepare him for what he finds in the Frozen Kingdom—a cursed land filled with magic… and a camaraderie Reardon has never known. Over this strange, warm community presides the enigmatic Ice King himself, a man his subjects call Jack. A man with skin made of ice, whose very touch can stop a beating heart.

A man Reardon finds himself inexplicably drawn to.

Jack doesn’t trust Reardon. But when Reardon begins spending long days with him, vowing to prove himself and break the curse, Jack begins to hope. Can love and forgiveness melt the ice around Jack’s heart?