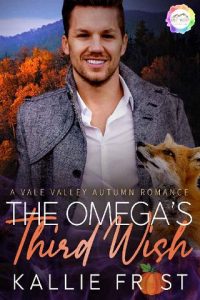 Omega fox shifter and single father Theo loves his daughter, Mindy, more than anything and will never regret the one night stand that created her. If only he could give her the life she deserves, including a house, two parents, and a kitten, instead of a crappy apartment and a father who works too much. When he writes down his wishes at a silly carnival booth, he has no idea a real genie plans to grant them.

Alpha fox shifter and single father Zeph has long given up on finding his one true love and having the big family he always dreamed of, complete with a bundle of kids and a cute kitten. Instead, he moves with his daughter to Vale Valley, on the advice of a friend, in the hopes of giving her the best start in life.

When Theo and Mindy show up at Zeph’s door, he immediately opens his home to them and it doesn’t take long until he opens his heart as well. But can two men with their own sets of baggage set them aside and find the love they truly deserve? A little kitten seems to think so.