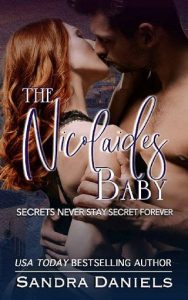 One trip changes everything
Rowan Stallings and her sister, Sierra’s, vacation on the Greek island of Santorini ended with some surprising turns.
Sierra found the love of her life, while Rowan found herself in the heated embrace of her new brother-in-law. She and Leo shared one passionate night together—one that had her heart begging her to stay when dawn arose the next morning. But her head told her leaving was the right thing to do. So she walked away.

One unexpected second chance
Leo Nicolaides moved on with his life after his night with Rowan. But now, almost four years later, he’s watching her walk down from his private jet with a tiny replica of herself in her arms. If things had been different, Mara might’ve been his child. But Rowan had left his bed and gone straight into the arms of another man upon returning home. He’s over her.
So why is he finding it hard to hold on to his bitterness and ignore his renewed feelings toward her?

One fragile life hanging in the balance
Rowan and Leo try to put their past behind them when the care of a newborn baby is placed in their hands. And maybe, just maybe, a new future together is within their grasp.
One secret revealed could destroy it all.