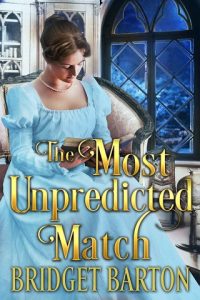 The Most Unpredicted Match by Bridget Barton – Free eBooks Download

Tabitha Beauchamp’s life takes an unexpected turn when her older sister elopes with an officer, leaving behind a heartbroken groom and a looming scandal. Despite being young and unprepared for married life, Tabitha agrees to marry Jonathan for their families’ sake. Little did she know her bond with Jonathan would grow and she would soon find herself falling helplessly in love with him…

What will happen when her sister returns and threatens to undo everything?

Jonathan Cromwell sinks into despair when the woman he loves betrays him and runs off with another man. Marrying Cecilia’s younger sister is no consolation, but the fear of a scandal is enough for him to make Tabitha his wife. When he notices his wife’s unhappiness, he vows to do better by her, leading him to see her in a completely new light. However, when his first love re-enters his life, Jonathan finds himself torn between the woman he once loved and the one who has illuminated his heart and existence in a profound way…

Will he throw away everything he has built with Tabitha for a love that has expired, or will he finally devote his entire heart to a deserving woman?

Jonathan and Tabitha have to adjust to a life that neither of them expected. Tabitha still fears that he will never truly love her, and Jonathan carries guilt for taking away her freedom. These hurdles are intensified when Tabitha’s sister interferes in their marriage, making it harder to put the painful past behind them and move on towards a fulfilling future. Will Jonathan realise Tabitha is the face of true love and abandon the remains of a false one? Will their lives forever be tainted by how their relationship began, or can they finally look ahead and claim their own happily ever after?

“The Most Unpredicted Match” is a historical romance novel of approximately 80,000 words. No cheating, no cliffhangers, and a guaranteed happily ever after.