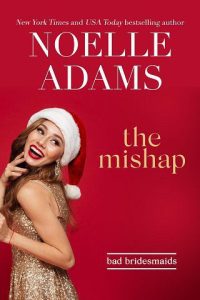 Ariana Kensington has had a slight mishap. Or maybe a major one.

Last Christmas, she had a hot fling with a mysterious guy at a ski lodge. She had the best time of her life with him, but they both agreed it was no-strings-attached. So she’s moved on and has been living her life like it never happened. Then he turns up at her friend’s wedding a year later. With two kids. And a girlfriend. He’s as off-limits now as it’s possible to be, so it doesn’t matter how attracted to him Ariana still is. She has to stay away from him–which gets harder and harder as he decides to hang around town for the holidays.

Bradley Barnes thought he’d put his steamy week with Ariana behind him, but as soon as he sees her again, his safe, stable world is blown apart. He realizes he never stopped wanting her. But she doesn’t seem to even like him anymore, and he’s already in a relationship that he’s trying to make work for the sake of his children. He has to think about his family and his future. He can’t indulge in these fantasies about a woman who will probably end up hurting him.

But it’s Christmas. And bigger miracles have happened. Maybe his heart can come to life again.