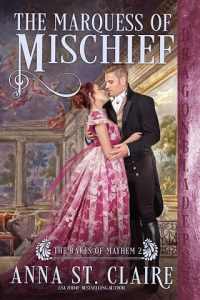 The Marquess of Mischief (The Rakes of Mayhem #2) by Anna St. Claire – Free eBooks Download

As a second son, Christopher Anglesey never planned to become the Marquess of Banbury. However, his brother’s death forced him to assume the title and its responsibilities. Still, he refuses to relinquish his dangerous job with the Crown or marry. His job requires he maintains a presence at most ton events. However, Christopher avoids the marriage-minded mommas and their vapid daughters.

On the heels of a successful first Season, a carriage accident on the way home from London leaves Lady Diana Lawrence blind. She resigns herself to a life without love or marriage and still attends ton gatherings only to please her mother—who still believes love will find her daughter. While attending a museum tour with her best friend, Diana overhears plans to kill the Prince Regent, placing her in the crosshairs of a killer.

Christopher’s assignment brings him to the museum, where he discovers a beautiful young woman desperate to escape and recognizes her as his sister’s best friend. She may be the one person who can help save the Prince Regent’s life. Sparks fly as he tries to protect her and find a killer.