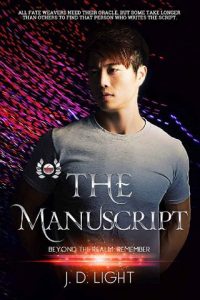 The Manuscript (Beyond the Realm: Remember #6) by J. D. Light – Free eBooks Download

There’s no time. Remember the Manuscript.

Omi has had vague but vivid dreams his whole life but would forget them within minutes of opening his eyes. When he started writing the dreams down as soon as he woke up, he suddenly realized the significance when things in those dreams would pop up in his daily life. A broken toaster that caused a ridiculous automobile accident that was thankfully not fatal to anyone. A pop can that exploded in the middle of class and covered his least favorite teacher in orange soda.

Omi’s dreams about a man with sunflower eyes were his favorite and enough to fill the pages of a manuscript. He couldn’t help but fall madly in love with the man, even if he never had a name. But the beautiful stranger never appeared like the other objects in his dreams and with every day that he didn’t, Omi became more and more depressed until he finally had to lock the manuscript away and stop writing about the man.

Six years have passed since Omi has touched the manuscript, but he would recognize the man that shows up at his favorite coffee shop anywhere, even before he gets close enough for Omi to see his sunflower eyes. How is a guy supposed to react to seeing the man he’s been in love with from the time he was eighteen in real life for the first time? Probably NOT how Omi does.

Canton has waited for his oracle for two hundred long years, and he desperately wants to finish his work, but the more time he spends with the feisty man, the harder it is to remember to keep his distance emotionally. How can he possibly spend endless hours with a man he wants so much and not get to treasure him like he wants?

The answers to that just might be found in the pages of a manuscript Omi isn’t sure he wants to share.