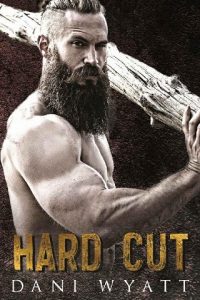 Do you like lumberjacks? Mountain men? Of course, you do! These heroes will do anything to claim their one and only. They take possessive and protective to the highest peaks. These are all standalone, safe, no cheating, insta-love romances with five pepper heat levels in the Men of the Woods bestselling series. But, that’s not all! There are also TWO exclusive short stories included never published before.

Includes:
Hard Cut – Book 1:
By the time Flint Rendell caught the beautiful, curvy brunette in mid-air, he already knew he’d never let her go. Flint figured his life of chopping down trees and building his cabin in the woods far from civilization, would be his life. He’d never found much use for other people, but from the moment he caught a glimpse of her, everything changed.
Wren Reynolds lived a nomad’s life with her hippie parents until a tragedy stole everything from her. Starting over in the middle of nowhere she dreamt of finding peace again. When the local lumberhunk rides in on his white horse to save her from herself, her dreams begin to change, and she starts to believe in fairy tales again.
But, fate had different ideas, and an incarceration that saves her, but sends Flint away changes everything. Can these two find their way back or will the real world have its way, and end their happily ever after before it has its chance to begin?

Deep Cut – Book 2:
Cain Matthews lives life on his terms. His ax and the trees of the forest his only companions for as long as he can remember. When his brother moves back to town and he lays eyes on the forbidden fruit he’s brought with him, his simple life becomes very, very complicated.
Melody Lane thought she was living the fairy tale. Schooled and living in London with her mom and dad, she wakes up one morning to find out you can’t predict what’s to come. Moving a continent away and starting a new life isn’t the worst of it. When her father introduces her to the sexy, brooding woodsman, she’s sure life is just one cruel joke.
They shouldn’t want each other. It’s every kind of wrong but when Melody shows up on Cain’s doorstep, things that should be wrong, become very, very right.

Rough Cut – Book 3:
I never thought moving to a new town for a fresh start would include a growly woodsman who has me changing my panties several times a day.
His body is cut from the same hard wood that I see pressing out from under his jeans whenever we are close. I’ve never been this interested in a man, but whenever I think of Roan, parts of me tingle I didn’t know I had. One second, his hands are giving me pleasure I couldn’t have imagined then the next, they’ve got me over his knee teaching me lessons you don’t learn in school.
Once he gets me under his roof, there’s no turning back. He shows me just what it’s going to mean to belong to him and belong to him I will. For a moment, I’m in heaven, until the very thing that brought me here to Roan’s world, is the thing that may keep us apart.

Straight Cut – Book 4:
I fell in love with her the second she pointed that rifle at my head.
When she threatened to put a bullet between my eyes, I knew I had to have her. She reminds me of one of those animated princesses, with white-blond hair to her waist, curves that make it hard to walk straight and ice-blue eyes that told me…I’d found the one.
I never thought much about why I waited…you know, the big ‘V’ sort of waited…but now I know. She will be my first. She will be my last. I will give her everything—and then a little more.
Only, someone else is after what belongs to me and he’ll go to any lengths to take back what he believes is rightfully his. But he will have to go through me first.
And that ain’t gonna happen.