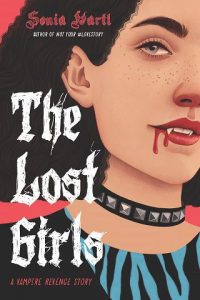 Sonia Hartl’s The Lost Girls is laced with dark humor and queer love; it’s John Tucker Must Die with a feminist girl gang of vampires.

When Elton Irving turned Holly Liddell into a vampire in 1987, he promised her eternal love. But thirty-four years later, Elton has left her, her hair will be crimped for the rest of immortality, and the only job she can get as a forever-sixteen-year-old is the midnight shift at Taco Bell.

Holly’s afterlife takes an interesting turn when she meets Rose McKay and Ida Ripley. Having also been turned and discarded by Elton—Rose in 1954, and Ida, his ex-fiancée, in 1921—they want to help her, and ask for her help in return.

Rose and Ida are going to kill Elton before he turns another girl. Though Holly is hurt and angry with Elton for tossing her aside, she’s reluctant to kill her ex, until Holly meets Parker Kerr—the new girl Elton has set his sights on—and feels a quick, and nerve-wracking attraction to her.