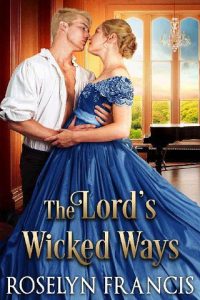 Clayton is bound to avenge the lord who is responsible for his father’s ruination. And what better way to succeed than creating a scandal around his daughter’s name?
Then he could marry the poor girl and make their family business his own.
Lady Lila Winters has made a vow to her late mother to marry only for love. But her fate seems to change when she is caught in a compromising position with a dreadful rake. Thankfully, the most charming gentleman appears, willing to become her knight in shining armor, offering to marry her.
Maybe her promise could be fulfilled after all.
The married life of Lila and Clayton starts, and everything goes according to his plan. Yet, he never considered what a temptation his new wife might be. And while Clayton’s desire grows, second thoughts about his plan travel up his mind.
For he is guilty of scheming behind his wife’s back, and if she learns the truth, he will surely lose her forever.
She became a victim to his foul ways, he got trapped in his forbidden desire…